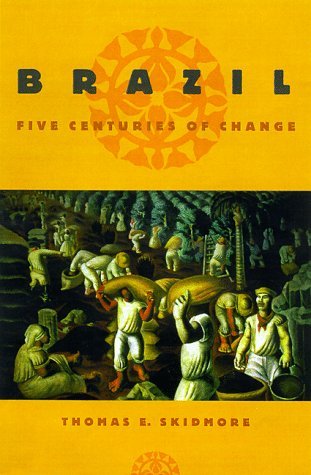 With a land mass larger than the continental United States, a unique culture that is part European, African, and indigenous, and the largest economy in Latin America, Brazil is one of the most important—yet one of the least understood—nations in the world.

Thomas Skidmore, a preeminent authority on Brazil, vividly traces the 500 years of Brazil’s development. Its epic story begins in the wake of Vasco da Gama’s historic circumnavigation of the globe, when another Portuguese vessel, commanded by Pedro Alvares Cabral, ran aground on the coast of Brazil in April 1500. From there Skidmore probes Portugal’s remarkable command of the vast country in the face of the advances of the Spanish, French, and Dutch colonial interests; Brazil’s compromised independence in 1822; its evolution as the center of world coffee cultivation; and the creation of the republic in the late nineteenth century. He also examines its unique forms of modernist art and literature, the dictatorship of Getulio Vargas and the military coups, and the liberal reforms of current President Fernando Henrique Cardoso. Informed by the most recent scholarship available, Brazil explores the country’s many blessings: ethnic diversity, racial democracy, a vibrant cultural life, and a wealth of natural resources. But, as Skidmore writes, the Brazilians must also grapple with a history of political instability and military rule, a deplorable environmental record, chronic inflation, and international debt. An ideal choice for undergraduate and graduate courses in Latin American history, this eloquent and detailed look at Brazil will be the standard history of the country for years to come.