Great Time Coming: The Life of Jackie Robinson from Baseball to Birmingham 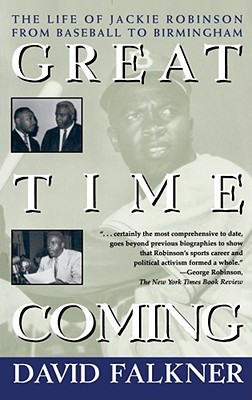 Jackie Robinson’s extraordinary courage, his unflappable dignity, and his astonishing feats on the field as the first African-American to play on a major league team made him not only a great sports legend but a genuine American hero. In this comprehensive, moving portrait, David Falkner explores in detail the lifelong influences on Robinson, the pressures he had to bear, and the contributions he made to the cause of integration.

From Robinson’s famous battle with the army over segregation to his rigidly maintained restraint in the face of ugly prejudice and life-threatening hostility from baseball fans and players alike, to his post-baseball efforts to help African-Americans establish an economic base within mainstream America, Falkner illuminates Robinson’s inner strengths and his determination to make a lasting difference in American society.