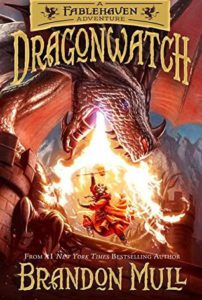 Dragonwatch picks up where Fablehaven left off. It’s been a few months since the final big battle with the demons, and things are mostly back to normal. If living on a sanctuary full of mystical beings is normal.

Seth is still his usual self – annoying whiny teen boy who thinks he is invincible and doesn’t ever think through the consequences of his actions. Kendra is still a unicorn love-struck teen girl, though her head is still mostly on straight and she makes choices based mostly on logic. But when they are chosen as the new co-caretakers for Wyrmroost, life becomes a bit more interesting.

Through all the adventures and magical creatures, this book is the story of taking chances and saving the world, one dragon sanctuary at a time. Hopefully future volumes continue on in the same thread. Previous fans of Fablehaven will not be disappointed, and it looks like there are some new characters who will soon be having their own magical adventures.